This blog drags together, into one swirling maelstrom of crackling energy, my various wargames interests. There are links on the top right to my other blogs, each more calmly dedicated to one particular gaming universe.

I aim to post a new painted figure (or at least a WIP, for larger models) every Friday. Every Tuesday or Wednesday, I will post a battle report, a terrain project, or a few lines on whatever happens to be the whim of the moment !

The pages at the top of the blog contain historical information on the periods that interest me. They are primarily an aid to my poor memory, and not meant to be in any way exhaustive, nor necessarily correct.

I hope this blog offers you much enjoyment and some inspiration !

Another very fun Rangers of Shadow Deep scenario, played out in my anthropomorphic "Jungle Deep" world.

I played "Blood Moon", which is a standalone adventure, as a prequel to the "Temple of Madness" quest.  Despite overwhelming odds, the astonishing talents of samurai guinea pig Aka Morumotto, proved, under a moonlit sky, that the Jungle Deep has not won yet. 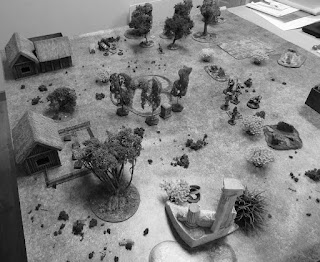 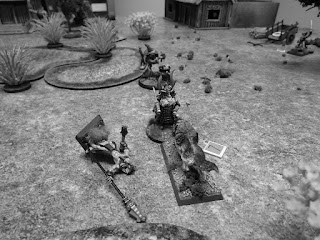 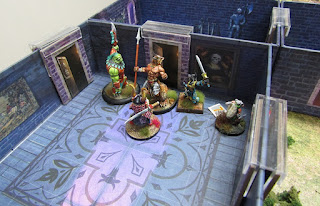 A bit of speed-painting this week (well, speedy for me, everything is relative...).

You can never have enough undead (especially if you play Rangers of Shadow Deep or Conan), and I, gasp, don't have any skeletons in my wargames cupboard.

When a chum gave me a bunch of GW sprues he couldn't get around to, I made up 18 of the fellows.  This is the test figure for the speed paint job.

A brown undercoat, then a quick white zenithal spray without worrying about splatters or texture.  No care taken dry-brushed PA Ivory Bone, a bit of colour slapped on the various bits and pieces (harness, shield, axe,..).

A glaze of GW Sepia over the whole lot. 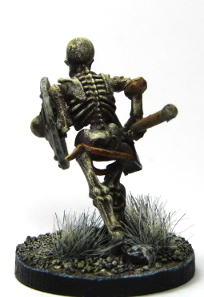 A bit more care on the front side, with some PA Neon Yellow (gone back over with Sepia Glaze on the ribs), some rough edge highlighting on the axe, shield rim and harness, a bit of spot-highlighting here and there, and to finish it all off some don't-look-too-closely-please OSL. 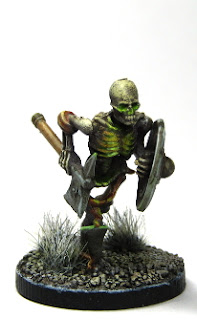 I think he looks menancingly serviceable, and his 17 ex-colleagues can be whacked out between other paint jobs.  Then they'll all die (re-die ?) within 30 seconds of arriving on the battlefield.  Oh well. 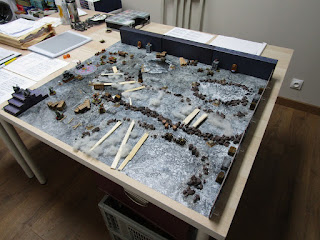 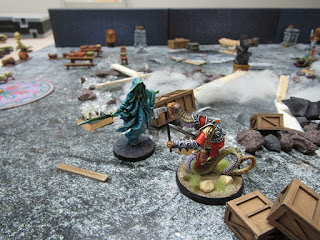 Edguin is a little mouse (the figure stands, or rather stoops, 20mm high) from the Oathsworn range, the first I have painted. 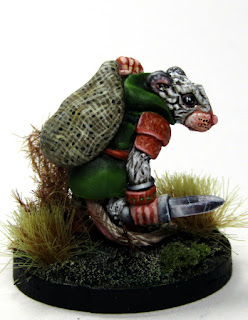 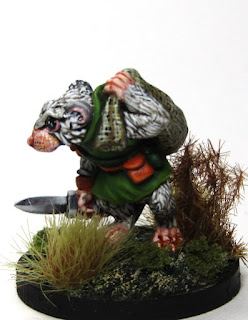 I have a lot of good things to say about these figures - be it that you play Badgers and Burrows or, like me, Rangers of Shadow Deep or another ruleset in an anthro world.  I will however save the review for the next painting post, which will hopefully be back on schedule and therefore next Friday.

The month of April totally sucks.  I basically spend it at work, and when (and if) I get home, I rarely have much energy to paint.

I have nonetheless managed to paint a grand total of one figure this month (ooooo). 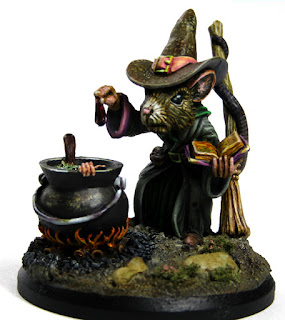 It is one of Dark Sword Miniatures most excellent anthropomorphs.  My youngest daughter chose her, and I admit I wasn't much taken by the figure at the first.  Then as happens, I suddenly warmed to it, and got the brushes out.

I am most pleased with the paint job (hey, something good has to come out of stupid April).  I tried a new technique, painting highlights in a different colour to the base colour, and then using a glaze.  For example, pink highlights on brown, followed by a Seraphim Sepia glaze.  This seems to have given a pleasant crisp finish to the mini.

The base is a total plagiary, I lifted it from the official paint job on the DSM site.  As they say, imitation is the highest form of flattery, I just liked what they did so much, I simply gave up trying to think of anything else. 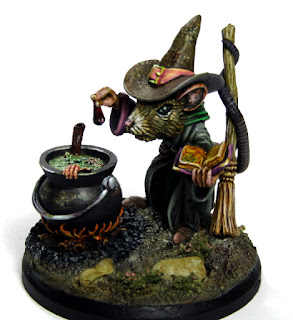 This will be a character for Rangers of Shadow Deep, someone I'll arm with long range spells as she cannot be lugging that cauldron around the battefield !  The name Angadrême is that of the patron saint of a small town in France that I recently visited.  She had the power to tame fire, which I liked, and the sort of name I would have given to one of my daughters, if only my wife did not have Ultimate Power of Veto.

Since painting has not been much of an option, I have used some spare time to first order some new anthros, and then clean them up and prime them.  I now have over thirty in the paint queue.  To my traditional Dark Sword Miniatures, I have added some Alkemy, a smattering of Briskars, a Bushido mini, and a hefty dose of Oathsworn.  The latter were a very pleasant surprise indeed, more on that later as they will be among the first to go under the paintbrush.

The Back of Beyond 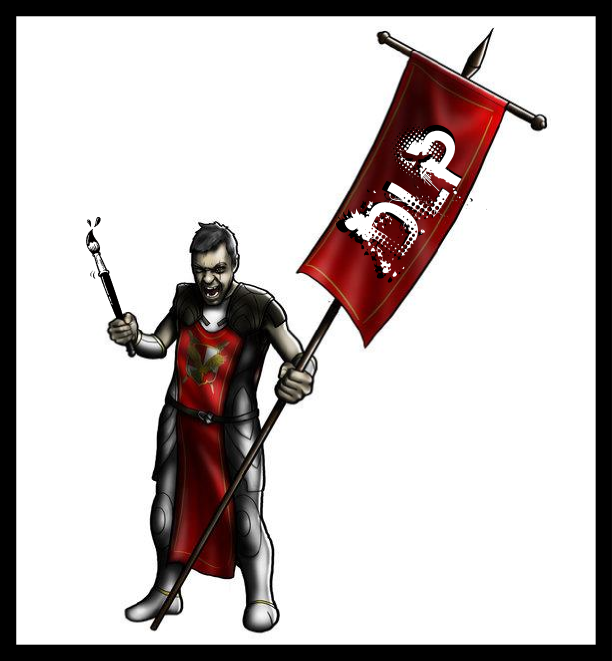